I heard about the ‘Creator Economy’ back in 2019. Since then, I’ve been low-key obsessed.

Why? Because the creator economy is a big deal for content marketing. We’re both doing the same thing, at the end of the day: building relationships on the internet by making stuff.

But while marketers came to it laden with decades of ‘best practice’, online creators had a clean slate. They’ve discovered new and exciting ways to build audiences. And, if I’m honest, I think they do it better than we do.

When I look at the creator economy, I see the future of our industry. And that future is more fun, creative and freewheeling than marketing has been for the last few years.

So what is the creator economy? And what can we learn from it?

What is The Creator Economy?

The Creator Economy is an umbrella term used to describe the millions of independent creators that earn a living making content on the internet. 50 million people globally say they are creators, although only two million consider themselves ‘professional’.

Name just about any niche you can think of and there are probably people out there sharing their passion for that subject online. They monetise their content through ad revenues, paid subscriptions, brand sponsorships and, in some cases, merchandise.

Lenny Rachitsky was a Product Manager at AirBnB for seven years before he became a full-time creator. His newsletter started as a single post on Medium. Unexpectedly, the piece took off.

“It got into the top few hundred of Medium posts, Medium featured it… It ended up driving a bunch of traffic, and I made some money.” He told Substack a year later.

“Two things came out of this for me. One is maybe I have some stuff that I could share that people find useful, and two is you can make money writing. That got the bug in me to do this a little bit more.” 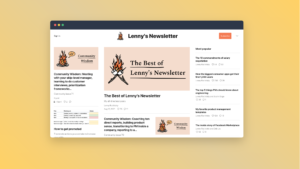 These days Lenny’s Newsletter is one of the biggest newsletters in the tech and product scene. He has over 100K followers on Twitter and 90K email subscribers. His rough ARR as of Feb 2021 was around $360K. It’s probably much more than that by now.

Admittedly, Lenny is a big player. Very few creators are hitting those numbers. But a lot of creators are building audiences who are happy to pay for their thoughts, ideas and opinions.

People are not only consuming their content, they’re enjoying it so much they’re willing to pay.

That’s a level of engagement most marketers can only dream of, right? Let’s be real: we give our content away for free and a lot of it gets ignored.

So what are creators doing differently? And what can we learn from them?

Get more paying users for your SaaS

Every other week we share articles, video tutorials & useful links to help you get more sales-ready leads for your company.

It’s all about the one-to-one relationship

The most obvious difference between marketing and the creator economy is the relationship with the audience. Creators are people, not brands. The relationship is one-to-one.

The creators I pay to follow are people I like, trust and respect. I’ve never met them – and this may sound weird – but I kind of feel like I know them. I can’t imagine what it would be like to feel that way about a brand.

This shift toward one-to-one relationships in media is part of a much wider trend. Media companies are losing ground to individual creators. User-generated content now accounts for 39% of time spent consuming media, increasing to 56% for teens. 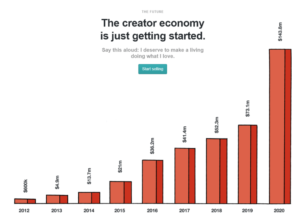 Creators are more real and relatable than media companies and marketing departments. They can do and say whatever they want. They can form genuine relationships.

The reality is we’re way more interested in what people say than what brands say. That’s just human nature. Companies with in-house experts who are willing to put themselves out there and be the ‘face of the brand’ have always had an advantage. I think this trend will continue.

In the future, we’ll see more brands putting their domain experts and creatives in the spotlight. The same way Moz used to do with Rand Fishkin, or Collab Fund does with Morgan Housel.

These “in-house creators” will give people a reason to keep coming back, or to look out for that next newsletter. They’ll appear on podcasts or at events. The brand gives them space to create and explore their curiosity. They share their audience and ideas with the brand.

They prefer organic social and online communities to SEO

SEO has been the default goal of most content strategies for years. This has been great for our analytics – nothing drives traffic like SEO – but not always for our content.

SEO focuses on content that’s useful, exhaustive and well-optimised – but unoriginal. Referring to what’s already in the rankings is SEO best practice.

Ryan Law, one of my favourite content marketers, summed it up better than I ever could:

In chasing search traffic, companies are sleep-walking into intellectual plagiarism. They’re fixating on their keyword research tools and SEO briefs at the expense of originality and personality. They’re curating other people’s work, instead of creating their own. They’re choosing to make content longer, instead of better.

The Creator Economy doesn’t care as much about SEO. Instead of relying on keywords and optimisation, they rely on the strength of their ideas and opinions. They rely on the depth of their research and having something new to say.

Don’t get me wrong: I’m not saying SEO is bad or doesn’t matter. Clearly, it’s super important. But the Creator Economy has shown it’s not the only show in town. And, if you want to build a genuinely loyal audience, it may not be the best approach.

So what do creators do instead?

Here’s an awesome article from Harry Dry that breaks down his content distribution process. Instead of SEO, he uses organic social and a range of online communities. The article is short but it’s well worth a read. 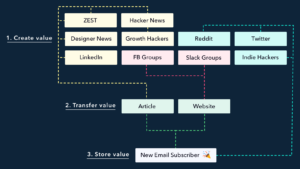 At the time of writing that post, Twitter was by far his top source of newsletter subscribers. Organic social is a big deal for creators. It’s where they pull together their various projects, share what they’re working on, interact with fans and conduct research. And if Harry’s audience is anything to go by, that time is well spent. 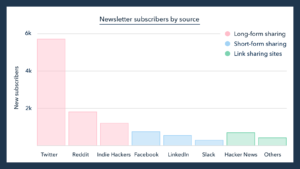 Some B2B marketers turn their nose up at organic social, but the Creator Economy has shown that you can’t sit back and wait for your audience to find you. You need to meet them where they are. That may be on Twitter, Slack, Reddit or elsewhere.

Another interesting difference is creators’ approach to getting subscribers. For the last few years, marketers have debated whether content should be gated or ungated. Online creators have opted for gating, but they tend to do it in one of two ways.

The first way is to invest a lot of time in creating something truly awesome, give away about 50% and hold the rest back for your subscribers. You can see an example of this here from Trends.vc.

We recently experimented with mid-gating our Playbook and the early results have been really encouraging. If you’re interested, check out this step-by-step breakdown of what we did and how it’s going.

A mix of gated & ungated

‘Building in public’ first caught on in the SaaS scene. Put simply, it’s the process of sharing what you’re doing, why you’re doing it that way and what you’ve learned. Rather than presenting a polished final product to the world, you share the process of building it and gather feedback as you go.

There are all kinds of advantages to this. You build a loyal and trusting audience. You get feedback and iterate your product faster. You can reflect on what you’ve learned and share those insights with others.

The Creator Economy builds in public by default, especially the tech side of it. In some ways, the ‘behind-the-scenes’ stuff is just as interesting as the newsletter, podcast, YouTube channel or blog they earn a living from.

Building in this way humanises the creator. It gives them a chance to share their story, struggles and ambitions. This deepens the personal connection with the audience.

The ‘building in public’ mindset is very different from how marketers typically operate. We keep the process secret. We work hard behind closed doors to create things that are as close to perfect as we can get. We gather feedback internally instead of from our audience.

This is understandable. Ultimately, we’re answerable to the business and its investors in a way that creators aren’t. We don’t have the same freedom to experiment (and occasionally fail) in public.

But I think there’s something we can learn here.

I’ve watched countless marketing teams tie themselves in knots trying to define the perfect strategy in advance of actually doing anything. I’ve watched campaigns get delayed for months while endless rounds of minute revisions are made.

How to make it as a creator: pic.twitter.com/sOOnFfw164

Programmers have this phrase: ‘ship it’. Shipping is the act of deploying new code to end-users.

You’ll often hear creators talk about the importance of shipping it. Get it out there and see how people respond. I think this willingness to ship, build and learn in public is at the heart of why creators are able to build loyal followings fast.

Analysis paralysis is real. Doing something is usually better than doing nothing and if you keep doing it for long enough, you’ll probably get pretty good at it.

How are we using these insights?

One of the awesome things about doing our own marketing is it gives us a sandbox to test our ideas. Some of the themes in this post are pretty central to Winbox’s marketing strategy (as it stands):

My gut feel is that, in the future, marketing will be less about building traffic and more about building meaningful relationships. The creator economy has already given marketers loads of new ways to do this. And as the graph above shows, it’s still very early days.

If you’ve got any questions or thoughts on anything I’ve mentioned, drop me a line on Twitter.

Get More Sales-Ready Leads from Your Marketing

Some agencies do lots of things. We do just one.

We’ve been doing it for years, we’re really good at it and we’ve got the happy clients to prove it.

Book a discovery call to find out how we can help you.

SaaS Pain Points: The Most Powerful Way to Pitch Your Product

Video: How to Turn Pain Points Into Awesome Content Ideas