Way back in 1996, just three years after the file format was invented, the godfather of UX design railed against them for the first time. Almost 30 years on, he hasn’t changed his mind:

PDFs are typically large masses of text and images. The format is intended and optimized for print. It’s inherently inaccessible, unpleasant to read, and cumbersome to navigate online. Neither time nor changes in user behavior have softened our evidence-based stance on this subject.

And yet, marketers use PDFs a lot. I download them, read them and make them all the time. PDFs are a big part of my job, which is weird because I agree with Jakob: they’re not great.

If someone invented a CMS with the functionality of a PDF they’d be laughed off the internet. Which makes you wonder…

Why do marketers still use PDFs?

Why do we use a file format that was declared redundant almost 30 years ago?

To highlight just how long ago we’re talking about, this smartphone was invented the same year as the PDF. 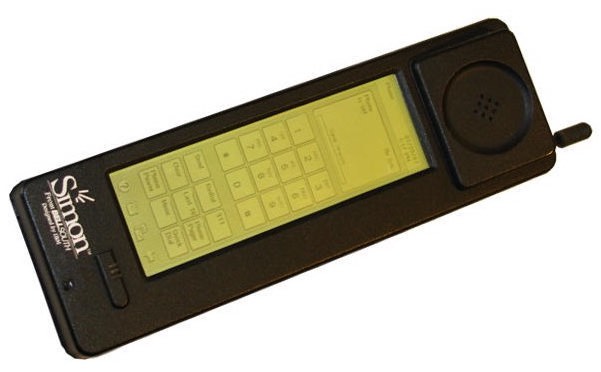 We use PDFs because, despite their limitations, they serve a purpose.

Imagine I’m a Marketing Director who’s spent £4,000 on some original research. This is a flagship campaign for the quarter. I’ve had to fight hard to get the budget to make this happen and everyone’s watching.

Do I really want to publish that research straight to my blog? That’s a pretty expensive blog post.

You might argue the format is less important than the content. If you’ve done awesome research then people will be into it, whether it’s a PDF, blog post or Twitter thread. And I’d be inclined to agree.

But I’ve tried having that conversation with clients a few times and the outcome is often the same: a blog post feels a bit anticlimactic.

So, what’s the alternative to publishing as a blog?

You could build a custom-coded webpage. But this would mean getting someone to design it and someone else to code it up, piling more costs onto an already expensive project. 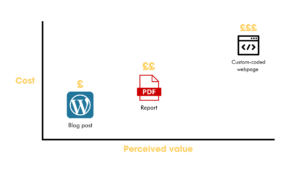 For most marketers, PDFs are a handy middle-ground between a blog post and a custom-coded webpage. A bit of sizzle at a low cost. They serve a purpose and the industry is used to them. Plus, you can always publish the headlines on your blog and offer more detail as a gated PDF – and repurpose the findings for your other channels.

But this doesn’t negate the problems with PDFs I mentioned at the start. PDFs are a stopgap solution, they just happen to be a stopgap we’ve got used to.

We owe it to ourselves and our audiences to find a better way. I recently had the chance to do just that.

Every other week we share articles, video tutorials & useful links to help you get more sales-ready leads for your company.

As some of you know, we pivoted the business last year. We went from doing a bit of everything to doing just one thing for a fixed price. We call this ‘one thing’ our ‘playbook’ – and we decided we wanted to put our playbook out there as a piece of content that would:

To do this, we needed a format or platform that would:

PDFs were out. So what should we do instead?

Where are all the PDF alternatives?!

You’d think there would be loads of off-the-shelf alternatives to PDFs. There are low-cost SaaS solutions to just about every problem on the internet. But there don’t seem to be many startups trying to fix this problem.

Without an off-the-shelf solution, we had to get creative. We ended up using a combination of Notion to create the content and Super to style and publish it to the web.

You can check out the (almost finished) playbook here.

Let’s take a closer look at both of these platforms and how we used them.

That’s a big question. The simplest answer I can think of is: Google Docs on steroids.

Notion has a massive range of uses. You can use it for simple writing and note-taking (like I do). Or you can manage every aspect of your life or business from it. Notion is easy to pick up and use, but that simplicity belies serious power and depth.

Check out this video for a more detailed explanation.

How Did We Use Notion?

We used Notion to create the content for our Playbook in the same way that you might use Word or Google Docs to draft a blog post. It’s where the ‘raw’ content was drafted and where it is still hosted. But Notion has a few limitations: 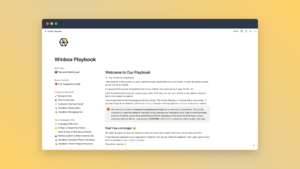 Thankfully, Super solves all those problems.

Super lets you turn Notion docs into fully-functioning websites. You create your content in Notion, put the link in Super and it takes the raw content, styles it and publishes it to your domain.

How Did We Use Super?

The closest fit for me was a template called Aether, which is for developer documentation. It wasn’t a perfect fit, but it had the core functionality I was looking for:

I know a bit of CSS, so I was able to write code to apply our brand guidelines. The end result is that our Notion doc went from this: 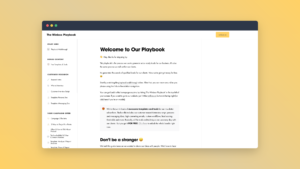 The more attractive version was then published on a subdomain of our site: playbook.winbox.co

Alongside finding an alternative to PDFs, I wanted to experiment with mid-gating, which is something I’ve seen Creator Economy folks doing for a while.

Basically, rather than gating the entire piece of content, you give most of it away and hold back a few ‘bonus’ bits as a conversion mechanism. This feels more generous than gating the whole thing and gives us a low-pressure way to get conversions.

Here’s how we did it:

We tried all kinds of things before settling on this approach. We tried password-protecting certain pages and emailing the password to people who sign up. We also tried sharing a link to the bonus content by email once people had filled in the form.

We thought this approach was more user-friendly because the user didn’t need to leave the Playbook to get the bonus content. If you make people leave, a lot of them won’t come back. Also, automated emails don’t always send right away, which means you could leave people hanging.

That said, I’m still not convinced this approach is optimal either. If you have other mid-gating suggestions, I’d love to hear them!

What are the results so far?

The results are good!

It’s early days for our new website and the playbook. We launched them two weeks ago and haven’t driven any traffic other than a smattering of organic from our social accounts.

But the playbook has already generated 14 new leads and one great SQL from just over 100 visits. The landing page within the Playbook is currently converting 24% of the people that reach it.

Next month we’re going to step up the distribution of the Playbook with the launch of our ‘Steal Our Playbook’ campaign. If those numbers hold steady this experiment will be a success. Both in terms of pipeline, but also doing something new and different.

If you want to try building something like our Playbook but you’re not sure where to start, drop me a line on Twitter anytime. I’m always happy to chat.

Get More Sales-Ready Leads from Your Marketing

Some agencies do lots of things. We do just one.

We’ve been doing it for years, we’re really good at it and we’ve got the happy clients to prove it.

Book a discovery call to find out how we can help you.

SaaS Pain Points: The Most Powerful Way to Pitch Your Product

Video: How to Turn Pain Points Into Awesome Content Ideas